By Grant James on October 9, 2012 in Analysis, Features 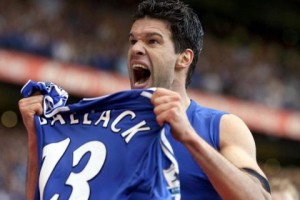 LAST week, Michael Ballack called time on his career. As a Chelsea legend, I could not help but be surprised by how little media coverage his retirement received. After Chelsea finally won the Champions League last May, ironically in Munich, many supporters said Ballack was the former player they felt would have been most deserving of a part in that victory. He had been a truly huge part of our success, and after seeing his tears in Moscow 4 years earlier, it would have been fitting to see him finally lift the “The Cup with the Big ears”. 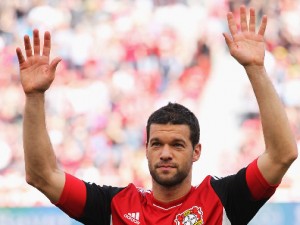 Ballack signed for Chelsea in 2006 on a free transfer after he had allowed his Bayern Munich contract to run down. It had been love at first sight – seeing Ballack score a brace for Bayer Leverkusen to eliminate Liverpool from the Champions League, and then score in the semi final against Manchester United, is the sort of thing to make a Chelsea supporter quite smitten. Watching him in Leverkusen’s run to the final that year cemented him as one of my favourite all time footballers. To then see Chelsea sign him 4 years later was something I could never have imagined. That he wore my lucky 13 was an extra reason to love the man, and not even a terrible dive to win a penalty for Bayern Munich at Stamford Bridge put me off! 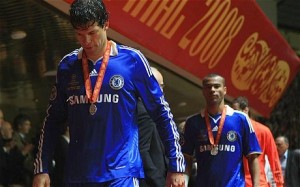 After joining Chelsea, he initially played at the top of a midfield diamond. I never really felt this was the best way to utlilise him. Nevertheless, Mourinho liked him there. I can remember his league debut quite vividly – a 2-0 win at Blackburn. Even though he had only trained for a few days before the game, he was reported to have covered the most ground of any outfield player. For me, he was always a player more effective at arriving late in goalscoring positions, but he had also shown himself to be a threat by stationing himself early in the box, then looking to drift off defenders and use his exceptional aerial ability on crosses. We only really started to see the very best of Ballack in December of his second season with the club. He had suffered an ankle injury during his first season which forced him to miss the FA Cup Final. It had also caused some apparent tension between himself and Mourinho after he went to Germany to have an operation after complaints about Chelsea’s medical staff. This was especially disappointing because Ballack had scored an injury time winner in the semi final against Blackburn. When he returned from injury, Mourinho had departed and Avram Grant was in charge. The midfield diamond was not used again that season, and Ballack returned in sparkling form. He even captained the side in that first game back after replacing the injured Frank Lampard. He looked a lot more at home in a 433, as his all-round skill set was perfect for the box-to-box role on the right of the midfield triangle. That season also saw him deliver probably his best Chelsea performance as he scored a brace in a must-win league game against Manchester United. He opened the scoring with a trademark header, and belted in a penalty for the winner. He also delivered several top performances in our run to the Champions League final in Moscow that season, especially in winning a crucial penalty in the semi-final against Liverpool, and he played exceptionally well in the final itself, but was heartbreakingly on the losing side. That season, we also ended second in the league, and lost in the Carling Cup final. This had sadly become a regular occurrence for Ballack in his career up to that point. 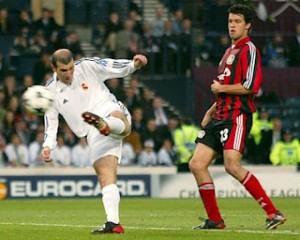 Ballack looks on as Zidane scores that goal in the 2002 Champions League Final.

In his first season with Leverkusen, they had been on course to win the league, leading Bayern Munich by 5 points with 3 games to go and needing just a draw on the final day. Ballack scored an own goal in a defeat to minnows Unterhaching, and ended up finishing second on goal difference. He later infamously lost a German Cup Final, a Champions League final and finished runner-up in the Bundesliga in the same season. He was a runner-up in the 2002 World Cup later that year, having dragged Germany to the final, only to sacrifice his place in that final by committing a selfless and vital professional foul in the closing minutes of the semi-final. He later delivered a superb tournament as German captain at Euro 2008, but again lost in a final, this time to Spain. Legendary status in his home country never quite materialised without the medals to back up his world-class displays. 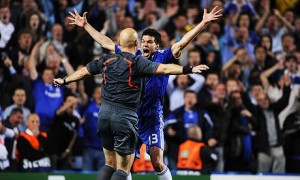 Ballack’s third season with Chelsea started under Big Phil Scolari, and after the Brazilian’s sacking, many media outlets named Ballack as one of the senior players responsible for getting Scolari the sack. Ballack always denied this in interviews, but the German was a very strong character with a big personality, and some of the amateurish things that went on under Scolari would have irked him. Guus Hiddink’s short-term appointment proved very beneficial to the German, who found himself moved in to a deeper role as part of a double pivot for the big games, alongside Michael Essien. He was absolutely outstanding in a 3-1 win at Anfield in a Champions League quarter final, providing a masterful pass in the build-up to Drogba’s goal. He also played in that role in two outstanding performances against Barcelona, though Tom Henning Øvrebø’s disgraceful refereeing performance denied Ballack the chance to appear in a third Champions League Final. It was Ballack’s shot that Eto’o blocked with his hand in the last minute, and it was Ballack who chased Øvrebø in protest. It had also been Ballack who had attempted, and failed, to block Andres Iniesta’s goal. His all-round display that night had been one of tremendous tactical discipline and intelligence. Ballack did start the FA Cup Final a few weeks later, but was one of the few poor performers on the day, and with Michael Essien on the bench, he was replaced after an hour. Nevertheless, he lifted the FA Cup and had his third piece of silverware with the club. 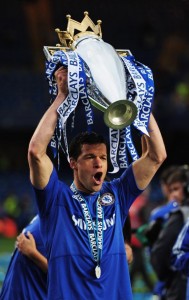 Carlo Ancelotti’s arrival at Chelsea initially saw Ballack in a midfield diamond again, but this time as the shuttler on the right. This role suited him well as his tactical intelligence, defensive abilities and under-rated crossing all came to the fore. However, it was a knee injury to John Mikel Obi which brought about the best run of Ballack form in a Chelsea shirt. With no other fit defensive midfielders, Ancelotti used Ballack in front of the back 4. Now 33, Ballack was happy to play in a deeper role and was nothing short of sublime as Chelsea put 7 goals past Aston Villa, 7 past Stoke and 8 past Wigan. Ballack’s ability to switch the play quickly and accurately with both feet was a fantastic weapon. The club won the Premier League that season, and Ballack finally had a league title in England at the third time of asking. Leading up to the FA Cup final that season, he had still not signed a new contract amidst talk that he wanted the security of a new 2 year deal. As Ballack was a high earner and almost 34, the club would only offer him one year. After Kevin-Prince Boateng’s disgraceful tackle broke Ballack’s ankle in that final, the contract offer was taken off the table altogether and Ballack was released. He was also forced to miss the 2010 World Cup, and never played for his country again. Ballack later said that Ancelotti had been desperate to keep him, but that Roman Abramovich had been the one to veto any contract offer of longer than one year. A mostly-poor second season with Ancelotti in charge followed, as Ballack was massively missed in midfield especially in the big matches. This was such a big part of his game. In Ancelotti’s first season, the side won home and away against Arsenal, Liverpool and Manchester United, with Ballack a master of controlling games, slowing the tempo when needed, defending set-pieces, and even occasionally using some of the dark arts. With him gone, Carlo’s second season saw very few points gained in the big games as opponents dominated midfield. 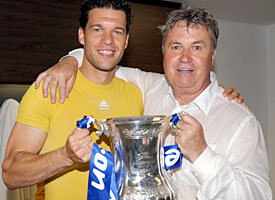 Ballack was genuinely one of the best midfielders of the last 20 years, and carried Germany on his shoulders for so much of his international career. He was a victim of the average generation of German players around at the same time as him. He had every string to his bow. He was genuinely two-footed, an outstanding long and short range passer, he was incredibly good in the air, a very strong character and leader, could score goals, and could play every midfield role to a world class level. I feel genuinely privileged to have seen him in Chelsea Blue. He departed the club with an exceptional record. 167 games played, 26 goals, unbeaten in 150 of those games, with 112 wins and only 17 defeats. His Premier League win percentage of 70.5% is the fourth best in history. For Germany, he scored an incredible 42 goals in 98 games. Mark my words, within the next few years, Ballack will be a top manager. Ladies and Gentleman, Michael Ballack, legend of the game.

Versatile Players: Tactical and Financial Benefits
Prototype Playmaker Oscar Can Do Everything

One Response to Michael Ballack: Farewell to a Chelsea Legend