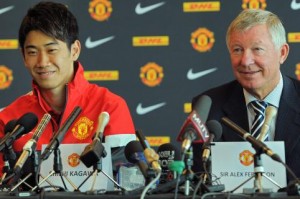 A traditional trademark of a Ferguson side is to see a Scholes/Carrick long diagonal ball to a winger in an advanced wide position, creating a 1v1 or 2v1 situation (depending on the overlap of the fullback). United’s squad is full of good wide players and they normally are suited to a strategy involving wingplay. Against Everton, who defended very narrow and deep (a common Everton defensive plan), United’s final third play was focused mainly on going ‘around’ Everton, getting the ball wide and getting crosses in. The quality of the crosses on the other hand was poor, especially in the second half when United became more desperate. A total of 6 accurate crosses out of 34 attempts reflects this. Nani’s delivery was particularly poor, however the movement of the attacking players in the box was not good enough either with Rooney not being proactive. Ferguson pointed to United’s poor final third play afterwards. Kagawa’s strengths are obviously not suited to aerial duels against physical defenders like Distin and Jagielka, and perhaps Ferguson made a mistake not taking him off instead of Welbeck. 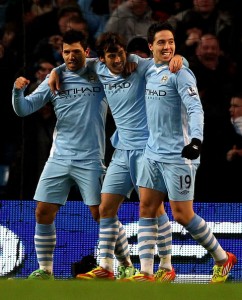 In contrast, Manchester City have a squad packed full of central playmakers (being played in wide positions), with only one orthodox winger in Adam Johnson. Last season, Johnson was often not trusted to provide enough defensive cover for his fullback and thus was generally used as a substitute and in the cup competitions. City’s lack of width was characterised by players like Nasri and Silva often drifting inside preferring to retain possession, crowding the central space, with the majority of crosses and out-balls being supplied by fullbacks. Judging by City’s performance against Southampton this weekend, they may be facing a similar challenge this season. Nasri and Silva started on the left and right respectively and both managed to create decent chances from central positions (see Nasri’s assist for Tevez). But with Johnson rumoured to be leaving, City may struggle against teams that defend very narrow. It’s no surprise that they are on the verge of signing Scott Sinclair, an orthodox winger from Swansea, who may have a big impact. 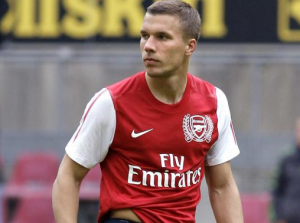 Santi Cazorla had a promising debut for Arsenal, playing in his usual unrestricted position (see this excellent video analysis on his game by Gary Neville). Cazorla often drops deep to pick up possession and initiate attacks, and so it will be important for the other midfielders like Arteta to rotate close to Podolski. It will also be important that Podolski maintains his position, not dropping towards the ball too much and making runs off the last man. Despite Podolski playing in a wide left position successfully for Germany, he played as a central forward for FC Köln and  is likely to be Arsenal’s first choice in the same position.

Wenger: “I think Podolski will play more central for us. Giroud is a different target man who would be more the player in a 4-4-2, he knocks the ball down, protects the ball well, makes play for his partners, and is a very intelligent player who has great physique, as well as being very strong in the air.”

On Podolski: “I see him as a centre forward but he has some work to do, to change his game a little bit, make runs in behind to protect the ball and move around the box. When you come from a wide position, it is not easy to do that. But he will get there. He is a fantastic finisher, but had no real opportunity [against Sunderland]. I will have to watch the game again and see what he did when we had the ball. I will have to study it.”

The suggestion is that Wenger will give Podolski the centre forward role and teach him to adapt rather than experiment with Giroud upfront and Podolski wide.

Arseblog made an interesting point that the idea this season is to have one direct player and one creative player in the two wide positions. Having two direct players wide like Gervinho and Walcott, with all the creativity in the centre  leaves the side too concentrated in one area in the final third. Against a team defending deep, with no space between the lines for the central creative players, this could be problematic.

Wenger: “We went for a different formula last year and the balance is not always right, but in this game today we needed maybe one more creative player to be a bit more accurate in the final third. There was not a lot of space left to our strikers; everything had to be created from our midfield.”

Possible options could be a creative winger like Alex Oxlade-Chamberlain opposite a direct winger like Gervinho, or Cazorla (or even Ramsey) opposite Walcott.

Andy Forrester is a professional football match and opposition analyst based in Qatar. All views are his own.
View all posts by Andy Forrester →

The implications of Alex Song to Barcelona
Branislav Ivanovic: A Right Back in a Centre Back’s Body